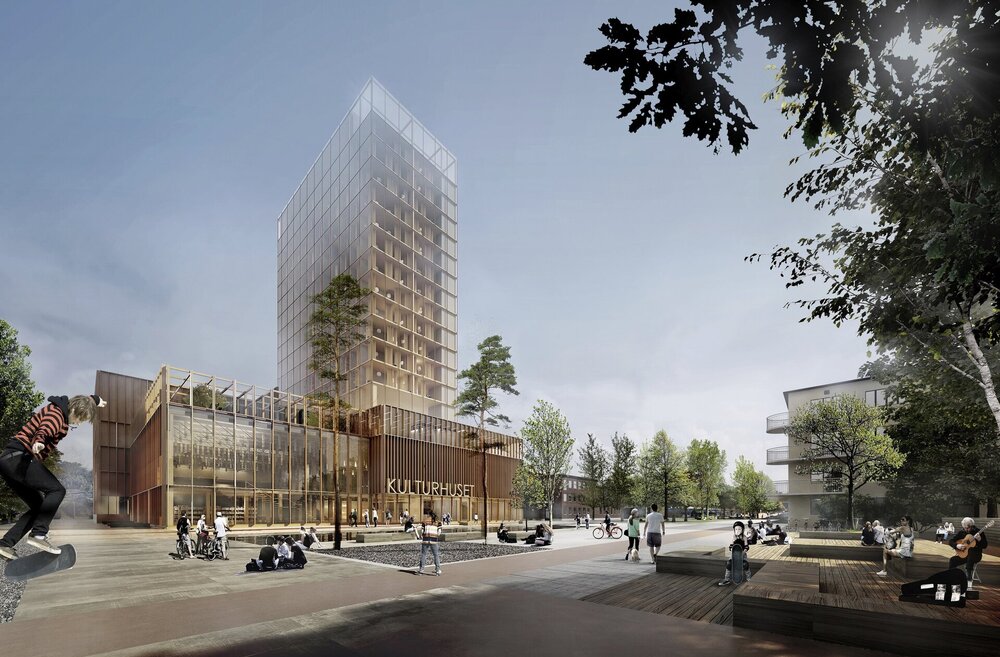 In northern Sweden, the world’s tallest wooden and aluminium building is steadily rising skywards. Designed by White Arkitekter, the twenty-storey structure, which will house facilities including a concert hall, a spa and a hotel, is a textbook example of the concept of green building put into practice. The Sara Kulturhus in the city of Skellefteå, fitted with ALUPROF’s most advanced, aluminium systems, is scheduled to open its doors in summer 2021.

Construction work began in autumn 2018 and the building is intended to be a symbol and landmark of region. It is named in honour of one of Sweden’s most important twentieth-century writers, Sara Lidman, who was born in the Skellefteå Municipality. The designers’ ruling idea was to create a building which would bring culture, entertainment and leisure together. Inspiring encounters, exhibitions, concerts, performances and banquets will all take place at the Sara Kulturhus, a dynamically developing space for the city’s residents and visitors from all over Sweden and the world.
The building consists of two volumes, a lower and a higher. Plans for the lower, four-storey volume feature six spaces serving as conference and performance spaces seating three thousand, two hundred people. The taller section takes the form of an eighty-metre tower housing two hundred and fifty luxury hotel rooms, a restaurant, complete with panoramic view, and a spa.

The tallest wooden building in the world

The aim of the companies working together on the development is to create an environmentally friendly, energy-saving building. With the main construction materials being wood, aluminium and glass, it is an example of the Skellefteå municipality’s wooden building strategy brought to life. Here, the Scandinavian tradition of constructing with wood is juxtaposed with cutting-edge engineering solutions, making the development a model of sustainable design and green building.
The lower volume, which houses the cultural facilities, has been constructed using prefabricated wooden elements attached to concrete slabs, spreading the load of the tower. The glazing was produced using ALUPROF’s MB-SR50N HI+ system, which was specially modified to accommodate the requirements of the development.

As Piotr Mika, the head of the ALUPROF technical support department explains: The façade of the lower volume of the building was constructed using the ALUPROF MB-SR50N HI+ system, which can be fitted with glass weighing up to one thousand, one hundred kilos, making it possible to achieve amazing views from inside. Apart from its aesthetic values, the system also guarantees the durability of the structure. The mullion and transom façade is fitted with polyethylene insulation, which not only provides an excellent thermal parameter with a Uf from 0.59 W/m²K and equally effective acoustic protection, but also facilitates the installation. What’s more, the MB-SR50N HI+ holds a top-grade, A+ certificate from the Passive House Institute in Darmstadt, meaning that it’s recommended for use in passive buildings.

The hotel section is being constructed from prefabricated, wooden room modules featuring panoramic glazing which reflects the firmament, giving the impression that the tower is soaring above the culture centre. The construction of the façade is distinctive in that it features double-skin technology, which increases the building’s energy efficiency. Double-glazing is used for the elevation of the cultural section, creating a sense that it is melding with its surroundings. The basis for the outer skin is provided by the ALUPROF MB-SW55.
A dedicated system designed for the development, it has obtained a BREEAM-SE GOLD rating certificate issued by Swedish business association Byggvarubedömningen (Building Material Assessment, BVB). The association, which is formed by Sweden’s major property owners and building contractors, evaluates products for the Swedish market, focusing on their sustainable development. The triple-glazing of the interior was produced using the ALUPROF MB-86 SI system, which features a highly durable profile and excellent thermal insulation, with an Uf from 0.92 W/m²K.
The Skellefteå Kulturhus design was shortlisted in the Culture section of the Future Buildings category of the World Architecture Festival in 2017. The following year, it won the Civic and Community category at the Architectural Review Future Project Awards, which are held during the MIPIM, an international property event hosted in Cannes. It was also nominated for the Best Futura Project at that event.
#aluminium_systems, #aluminium_windows, #aluminium_facades
SPRAWDŹ OFERTĘ FIRMY 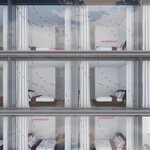 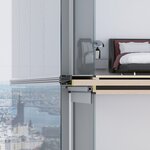 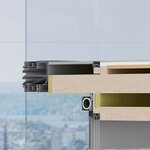 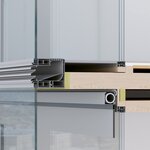 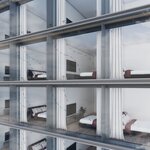