If you have beautiful views, you want to enjoy them – preferably all year round. The clients of “Vivienda en Elche” in the Spanish province of Alicante near Costa Blanca are able to indulge in this pleasure, made possible by a full-width glass façade, the individual units of which can be opened variably to suit the desires of the residents. Almost unrestricted panoramic views are permitted by the floor-to-ceiling units of the Schüco ASS 77 PD.NI sliding system.

The architects of the single-storey newbuild make reference to the country house building style of the region through their choice of materials and the shape of the building. Elements of their reinterpretation primarily include the saddle roof and the use of light, natural stone for the inner and outer floors, as well as for the north façade. These stylistic elements with a traditional feel strike an exciting, rich contrast in terms of material and colour compared to the modern natural and industrial building resources and components. External louvre blade sections and interior wood panelling are fabricated from Iroko tropical wood from Africa, while references to modern construction styles are made primarily through the large, glazed aluminium façade units and the exposed concrete of the roof and wall of the covered terrace at the end of the building.

Protected to the north; open to the south-west

The floor plan of “Vivienda en Elche” consists of a square building section with an elongated wing attached in a south-westerly orientation. This section creates an angle of 45 degrees. The part open/part closed façade design of the two inter-connected building sections is closely related to the individual usage zones. Discreetly sheltered from view, the sleeping, dressing and bathing areas are housed in the cube. The angled wing accommodates the living, eating and cooking areas, which are all oriented towards the terrace, garden and pool and incorporate parts of the outside area.
The natural light in the northerly sleeping and bathing areas is let in through windows and window doors, some sections of which open out onto a light well that is sheltered from view (Schüco AWS 65 BS and Schüco AWS 50.NI). Like other areas of the north façade, this light well with its natural wooden louvres and grids is in striking contrast to the light colouring of the natural stone façade panels and flooring.

An abundance of light through floor-to-ceiling system units

After the first discreet, closed impression left by the entrance area and the northern section of the building’s façade, a completely transparent panoramic screen unfolds along the entire length of the south-western façade. Here there are unlimited views of the terraced landscape with a pool, the garden and the countryside surrounding the plot with low-rise residential and commercial buildings dotted here and there. The special feature of this elongated, storey-height glass façade is the ability to open four areas measuring approx. 4 m x 3 m as desired using sliding doors.
The façade was constructed entirely with the Schüco ASS 77 PD.NI sliding system, the special Panorama Design of which permits storey-height glass areas to be created without any cross beams disrupting your line of sight. Embedded floor tracks ensure barrier-free transitions and produce seamless connections between the inside and outside spaces wherever this is desired.

Mild winters and warm summers – these moderate Mediterranean climate conditions in Spain's Elche had an impact on the choice of design of the sliding system. Schüco offers the ASS 77 PD sliding system in the non-insulated “NI” version especially for use in warmer climate zones. This system design was used in the Vivienda en Elche project together with double-layer insulating glass that has a sun shading coating. As a special feature, the units were fitted with safety glass conforming to Resistance Class 2 – a requirement for increased burglar resistance, which the Schüco AWS 65 BS and AWS 50.NI window systems installed on this building also fulfil.
Available in two other versions – ASS 77 PD.SI and ASS 77 PD.HI – the Schüco sliding system can also meet increased or even maximum thermal insulation requirements.

Schüco systems in the project:

On the south-west side, the building encloses the terrace and pool area in an angular shape. 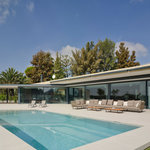 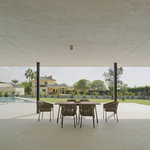 The shaded terrace is open on three sides for natural ventilation. 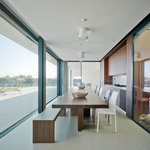