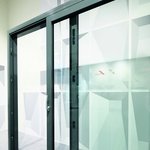 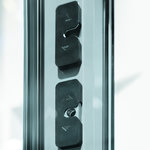 The proof is there: an aluminium parallel retraction sliding system can achieve the RC 2 resistance class when the “Roto Patio Inowa” smart sliding hardware is used together with security strikers specially developed by Roto for the mullion. The system by a Southern European manufacturer of aluminium profiles recently passed the relevant test.

New chapter in the success story

Many metal constructors are now using ‘Roto Patio Inowa’ to produce tightly sealed, extremely easy to use and attractive sliding systems – explains Matthias Nagat, Head of Roto Aluvision Range Marketing and Product Adaptation. The fact that RC 2-compatible systems can now also be manufactured thanks to the new security strikers makes ‘Roto Patio Inowa’, in our opinion, an unbeatably attractive system. We think that a new chapter in this system’s success story will be opened this year.

The “Roto Patio Inowa” sliding system has not brought any joy to thieves so far. This is because the hardware boasts circumferential locking mechanisms even in the standard version. Additional locking points that can be positioned anywhere as required considerably further increase the level of sealing and security. The new “Roto Patio Inowa” security strikers specially developed for the mullion are ideally suited to the special closing movement of the sash perpendicular to the frame profile. They increase the operating convenience and tight sealing of the sliding system.

The active, newly designed locking points on the mullion and other security components ultimately make the sliding system RC 2-compatible. Components are used here that manufacturers of aluminium windows are already familiar with. These include security mushroom locking cams, which hook securely into the security striker, preventing quick jemmying.
A lockable handle with 100 Nm torsional resistance prevents the hardware from being moved from the outside and therefore unlocked. Drilling protection, which is invisible from the outside and is installed in the groove, prevents the espagnolette from being drilled out.

Although all security-relevant components were optimised for the functioning and geometries of “Roto Patio Inowa”, they can be worked with in the same way as the components with the same name from the “Roto AL” Tilt&Turn hardware product range. They are available now. Aluminium system suppliers who would like to produce sliding systems in RC 2 with “Roto Patio Inowa” are given in-depth advice by Roto Aluvision and are supported throughout system testing.

Manufacturers now have the option of purchasing an adjustable version of the “Roto Patio Inowa” mushroom cams. This allows the gasket compression of the lock to be individually adjusted.  As a result, the tight sealing and user-friendliness of the sliding system can be further optimised.
This means that they remain true to the system’s claim, including in resistance class RC 2, as “Roto Patio Inowa” stands for intelligent sliding. The sashes are extremely easy to slide because the entire structure is mounted on rollers – without annoying scraping noises.
Locking is simple and requires little force, even in resistance class RC 2. This is because the specially adapted and optimised run-in characteristics of the locking cams in the “Roto Patio Inowa” strikers make it possible to effortlessly shut the sash in the frame by handle operation only.

A feeling of well-being inside while storms rage outside

“Roto Patio Inowa” also sets new standards in tightness and is therefore ideal for use in high-rise buildings where strong wind loads occur. This hardware remains tightly sealed even in bad weather conditions with storms and heavy rain impacting directly on the windowpane and frame.
This is because the closing movement perpendicular to the frame profile and the active control of all locking points cause the gasket to be pressed down reliably and evenly. No drafts can be felt, no sashes slam open and closed – thanks to unique technology.
#doors_hardware, #doors_fittings, #sliding_doors, #Roto_Patio_Inowa

The Ticon building in Drammen, Norway, was recently...

Since Hydro launched its CIRCAL recycled aluminium one...

The coastal landscape as the shining star

In the Greek town of Tolo nestled among the Peloponnese...

The construction supplier’s newest division has been...