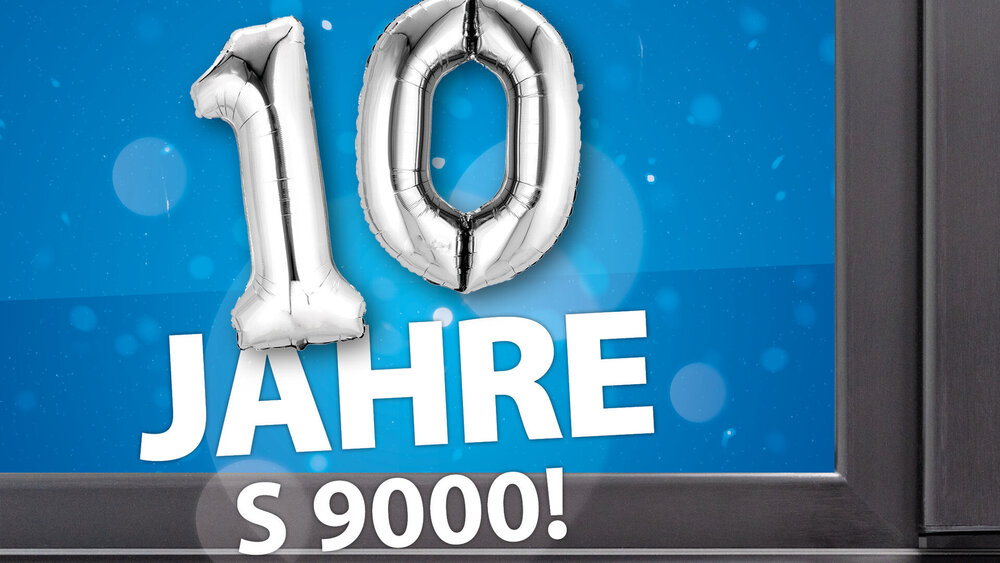 The S 9000 system platform turns 10: the versatile GEALAN all-rounder was presented and brought to market in 2012. In the past 10 years, the GEALAN system S 9000 has proven itself with almost 200 million profile metres sold worldwide.

GEALAN is celebrating the milestone birthday of its proven S 9000 system platform: the versatile GEALAN allrounder was first presented to the public at the fensterbau frontale trade fair in March 2012 and then launched on the market later that year. In these past 10 years, the GEALAN system S 9000 has proven itself with almost 200,000,000 profile metres sold worldwide.
The innovative S 9000 combination system is a state-of-the-art system for windows, doors and lift-and-slide doors - optionally with two or three sealing levels. With its basic width of 82.5 mm, S 9000 is ideally suited for new buildings and renovations and also provides numerous design options.

The right solutions for all of Europe

The fact that the S 9000 system has experienced such a high level of acceptance over the past ten years is primarily due to the international distribution of this GEALAN solution. Throughout Europe, there are variants of the S 9000 platform that are optimised for the needs and construction methods of the various countries. In the Netherlands, for example, the S 9000 NL system is used in a wide variety of forms: from a particularly slim appearance to renovation profiles and particularly sustainable variants with a high proportion of recycled material in the system - all have three sealing levels in common, including a centre seal.

The key facts about the anniversary platform S 9000

Its versatility has helped the S 9000 system achieve several noteworthy facts and figures over the past 10 years:
»
Reklama...czytaj dalej ˇ

Around 85% share of GEALAN systems in Germany
» Approximately 100 different geometries are available in the system
» The profiles of the system are produced with the help of about 230 extrusion tools
» More than 16,000 different system variants were delivered from the German production and logistics site in Tanna within the last twelve months
» About 35% of the S 9000 profiles produced in Germany are finished with the surface technology GEALAN-acrylcolor®.
» More than 60% of the S 9000 profiles in Germany are sold in colour (GEALAN-acrylcolor® and decorative foils)

The S 9000 system platform provides a wide range of sash profiles. They were all developed with a focus on optimised thermal insulation and particularly high stability in the sash frame. The S 9000 portfolio includes:
» a wide range of faceplate options, allowing for narrowest face widths of up to 106 mm
» different frame profiles in centre and rebate seal - some of these can be optionally equipped with IKD® foam technology
» optimally prepared for the installation of triple functional glazing
» a matching lift-slide door is available in the system family
» a complete entrance door system with matching floor threshold
» available in a full range of colours and with the great advantages of the proven GEALAN-acrylcolor® surface technology

Further highlights in the S 9000 system:

» Recyclable: S 9000 is based on a closed material cycle through the use of fully recyclable materials and relies on the use of material concepts that have proven themselves over many years.
» Design-oriented: The profile geometries in the S 9000 system feature GEALAN's characteristic 15° bevel in the overlap. It emphasises the timeless look of the proven system.
» Powerful: S 9000 is designed for maximum thermal insulation. Even without complex additional measures - such as thermally separated steels - outstanding Uf-values of up to 0.89 W/(m²K) are achieved in the middle seal version and up to 0.97 W/(m²K) in the rebate seal version.
In addition, windows and doors from the system platform are possible with all GEALAN innovations: even within the S 9000 system, you can use the innovative, RAL-certified glass bonding method STV® (Static Dry Glazing) - even with coloured profiles. Through the targeted use of IKD® (Intensive Core Insulation) foam technology, outstanding thermal insulation properties are also achieved with coloured windows.
On its birthday, the S 9000 system platform demonstrates with impressive numbers, data and facts that it is indispensable to the GEALAN portfolio.