Company Eko-Okna S.A. does not cease to amaze with the pace of its development. It dynamically enters new foreign markets and aggressively purging in the country not only in the field of window joinery. Eko-Okna gains the interest also in the production of gates, fences, pergolas, and roller shutters.

Growth in size goes hand in hand with the continuous modernisation of production processes. The cooperation with FIMTEC POLSKA helps in this. Eko-Okna S.A. is currently making a real technological leap on its production lines, although it is definitely not the first step in this direction.

There is a constant, almost proverbial investment boom in the company's headquarters in Kornice. Production plant no 7 will soon be opened. In the meantime, employees are being recruited for new investments in Wodzisław Śląski and Kędzierzyn Koźle. New employees will service the most modern machine park in the world.  This will be guaranteed by FIMTEC POLSKA, which, as a proven partner, will once again deliver its flagship EVO-RS robots.

21 new EVO-RS welding robots, which guarantee the highest quality and durability of welding elements through the use of V-PERFECT technology. They will be purchased together with complete machining and cutting centers. They will include a number of auxiliary devices. All of them will be placed in newly built factories, allowing EKO OKNA S.A. to exceed limit of 100 production lines. And this is not the end of purchasing new devices. More production lines are already planned.

New production lines from Wodzisław Śląski and Kędzierzyn Koźle will certainly be copied by other manufacturers in the near future. Until now, only few production plants have managed to implement such modern solutions on a similar scale. Now, the company from Kornice can boast the largest machine park of this type in the world. The last investment worth over PLN 100 million only increases the advantage over the competition.

Automation at the service of customers

Quality is always the most important thing, but it is not the only criterion when purchasing window joinery. The time of order fulfillment is also important. Automatic HDMV drilling and assembly stations for window hinges will be used on selected lines producing window frames. 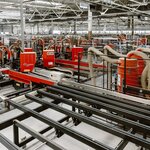 Automatic logistics solutions which will significantly reduce the waiting time for the products ordered by customers will also be used. The systematic use of this type of solutions allows the manufacturer from Silesia to maintain a competitive advantage for many years.
Reklama...czytaj dalej ˇ