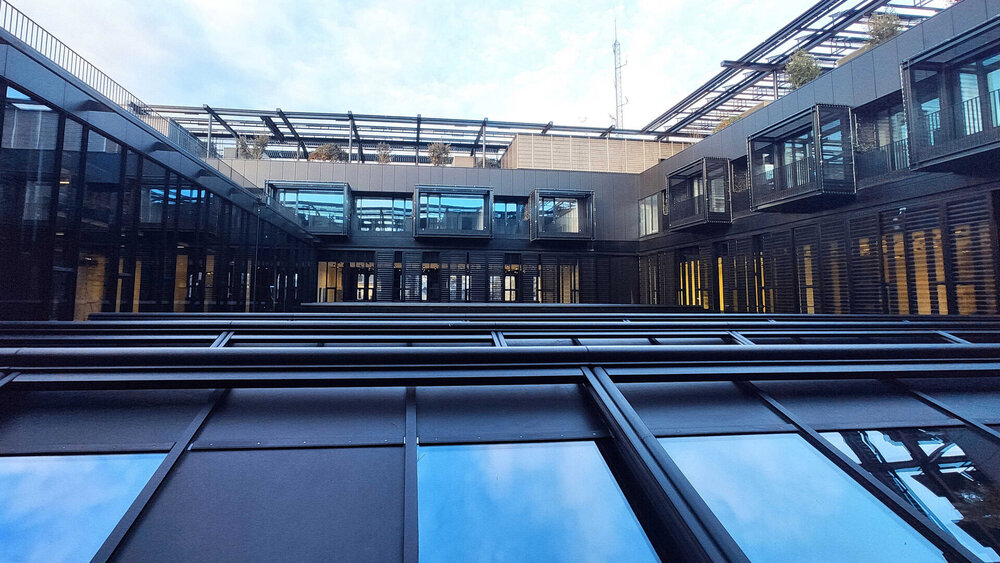 The historic La Poste du Louvre, the former Paris post office from the 19th century, has been remodelled by the French architect Dominique Perrault into a lively, mixed-use complex with an urban touch.

The modern glass constructions, which lend the public building a contemporary feel, are a key element of this successful transformation. Spanish firm GRUPO ALUMAN with its suppliers VitroChaves and SWISSPACER were responsible for implementing the glass constructions.
La Poste du Louvre, erected in the centre of Paris in 1888 by the architect Julien Guadet for the French post office, helped write the history of the post office for almost one and a half centuries. Many modernisations were shaped by the post office’s constantly changing activities. Even the visionary Julien Guadet declared La Poste to be a building with temporary uses, one that above all had to be flexible because the spatial requirements of the post office were constantly changing. The construction techniques of the industrial age are therefore hidden behind the classical stone façades. Using wide-spanning lattice frames made from iron, the contemporary of Gustave Eiffel created large, hall-like spaces which still offer enormous flexibility today.

The current remodelling of La Poste du Louvre is part of a series of major historic projects in the heart of Paris which, like the Parisian department store La Samaritaine, are being modernised and given new uses. The owner and promoter Poste Immo, a property subsidiary of the La Poste Group, held an architecture competition for the project in 2012, which was won by the French architect Dominique Perrault.
The aim of his urban planning and architectural concept was to open up the building, which was previously closed off from the outside world, to the city, to make it accessible to the general public and to make the charm of its industrial architecture visible to visitors. Covering an area of 32,000 square metres, La Poste du Louvre has been transformed into a mixed-use complex – including a 5-star hotel with 82 rooms, a restaurant and a rooftop bar with panoramic views, shops, social housing and offices, as well as inner-city services such as a police station, a childcare centre and the historic post office.
The opening up of La Poste to the city was architecturally implemented with new arcades, galleries and five covered walkways which meet in a courtyard in the heart of the complex. The design features a new, inner-city square which lets in as much daylight as possible with all-round glazing and affords a view of the metal structures.

Despite all the modernisation, the remodelling of Julien Guadet’s concept retains the building’s flexibility. This is achieved by preserving monumental structures as well as the industrial character and combining them with powerful, modern elements. The restored arches, the exposed metal structures in the style of Eiffel and the up to 6.80-metre-high tiled ceilings lend the various levels a unique character, while the new glass façades and glazed saw-tooth roofs ensure optimal incidence of natural light and completely new aesthetics in the large halls.
The street-facing stone façade was restored to its original architectural quality and upgraded with inwardly curved glass windows. These give the façade a new depth and allow more natural light into the interior. The original iron constructions were restored and exposed with their trusses, columns and capitals. The requirements of modern fire protection are met by a new supporting structure which functions independently of the old one and can withstand the additional loads. The glass façades, which envelope the entire courtyard from the first to second floor, add a modern look to this historic setting. Together with the new skylights, they create a diverse interplay of light and reflections inside the building.

Glass tailored to every room

The large glazed surfaces were carefully planned to meet all requirements for excellent acoustic and thermal quality as well as fire resistance. The courtyard façades consist of a mullion-transom curtain wall construction with aluminium cladding and double glazing. In total, 5,500 square metres of curtain wall were equipped with different properties depending on the requirements of the rooms behind it. For example, it was made both bulletproof for the police station as well as break-in resistant and fireproof for the other areas. The 5-star hotel was given a 2,000 square metre glass façade with acoustic zinc panels, the two-storey office wings were designed with glass saw-tooth roofs with highly transparent glazing and fabric exterior blinds, and the terrace of the panoramic restaurant features a glazed steel façade. 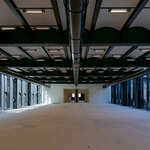 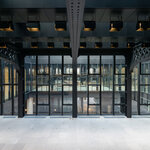 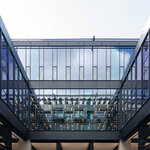 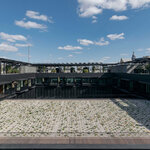 AluK: Answering the Most Testing Questions