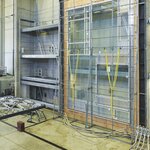 The Schüco AF UDC 80 unitized façade is tested in the Schüco Technology Center with a width of 5.7 m and a height of 8.8 m. 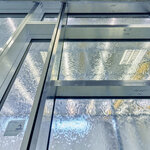 A test specimen consisting of representative units from the Schüco AF UDC 80 unitized façade is used for the façade test. 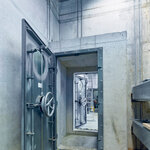 The test chamber is sealed so as to be airtight to ensure that any leaks which result from the application of positive and negative pressure are visible only on the façade.

The watertightness of the unitized façade is tested using a spraying device which applies 3.4 l/min m2 of water to the façade, similar to a heavy rainstorm. 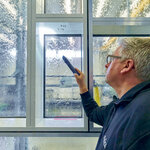 On the inside, a check is made as to whether any moisture has penetrated the joints of the Schüco AF UDC 80 façade units during the watertightness test.

As a state-of-the-art building envelope, the new Schüco AF UDC 80 aluminium unitized façade needs to meet a number of technical requirements as well as stand out with an innovative and attractive design.

To calculate the technical performance characteristics of the newly developed façade construction, the AF UDC 80 has been tested by the Schüco Technology Center under the supervision of ift Rosenheim in accordance with European product standard DIN EN 13830. This standard specifies three mandatory performance characteristics which need to be tested in order to obtain the CE marking in force across Europe: air permeability, watertightness and resistance to wind load.
For the test, a representative Schüco unitized façade sample measuring 8.8 m in height and 5.7 m in width and made up of various units from the AF UDC 80 façade system was constructed at the company's in-house Technology Center. The façade was mounted on a steel support with the original façade fixings used on the construction site and sealed so as to be airtight in order to make the installation as realistic and similar to an actual building as possible. This preparation work was carried out in order to create an airtight space so that any leaks were only detected through the façade being tested.

The sequence of tests is precisely defined in European product standard DIN EN 13830. Air permeability is the first aspect to be tested. It is determined by means of the volume of air flowing into the test chamber, which enters through the façade joints due to the predominant pressure difference. Two limit values must not be exceeded here:  1.5 m3/hm² (air permeability based on the overall area) and 0.5 m³/hm (air permeability based on the fixed joint length). A façade in the lowest class A1 maintains these values up to a negative pressure of 150 Pa. The Schüco AF UDC 80 unitized façade meets these requirements up to a pressure of 1200 Pa. This means that it falls under the highest air permeability category: class AE, which prescribes a pressure difference of over 600 Pa.

This is followed by the watertightness test. For this, a spraying device is installed in front of the façade at a distance of 40 cm. The surface is sprayed with a water quantity of 3.4 l/min m², which corresponds to a heavy rainstorm. The continuous film of water shows whether the planned rainwater drainage system in the profiles works properly.
The test is divided into structural and dynamic watertightness. For the structural watertightness, a constantly increasing negative pressure is generated in the test chamber. This is used to identify whether the negative pressure is causing moisture to be drawn inside through the façade. As with the air permeability, the test unit has achieved the highest class RE for structural watertightness too. It withstands penetrating moisture up to a negative pressure of 1650 Pa. For the dynamic test in accordance with DIN EN 13050, an axial fan is also used.

At the same time, a fluctuating negative pressure is generated in the test chamber, causing the façade to vibrate. This allows the room side to be checked to see to whether the façade can withstand the load and whether water penetrates through the joints under this pressure. The Schüco AF UDC 80 unitized façade withstands this load up to wind force 8 of 20 m/s.

Lastly, the resistance to wind load is tested. This is a key criterion for the building's fitness for purpose, as deformations can lead to cracks which means that water may penetrate the façade construction. Three heavy gusts of wind starting with a pressure of +/- 1500 Pa load the connections and anchor points, simulating a certain duration of use. A series of tests then follows with positive and negative pressure, which are used to test the deflection of the load-bearing structure and glazing bars and measure the deformation. The Schüco AF UDC 80 unitized façade can withstand an alternating positive and negative pressure of 2500 Pa here with a safety load of 3750 Pa. The unitized façade therefore achieves an outstanding value for wind resistance. After the wind load test, the air permeability and watertightness tests are repeated. Potential weak spots appear under the maximum load, as the construction has already been placed under a high level of stress due to the previous loads.
#aluminium_facades, #aluminium_profiles

NGA announces it has just published the Security Glazing...

Ramping up capacity to meet demand for Hydro CIRCAL