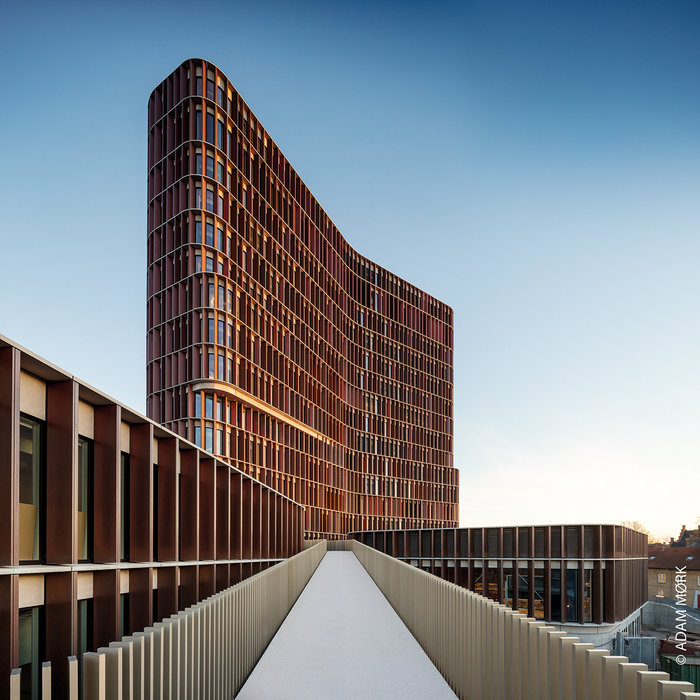 The multifunctional copper shell for the Maersk Tower in Copenhagen is a masterpiece designed by the Danish star architects C.F. Moller Architects, and constructed by the Vienna-based company of steel and glass technologists Waagner-Biro.

Rising sea levels, heavy rain, droughts and hot summer temperatures in the cities - these impacts of climate change affect all of Europe’s coastal towns and cities. But while others are waiting with their heads in the sand like an ostrich, the climate scenario for Denmark and its capital Copenhagen was cause enough to trigger a rethink a few years ago. Constructing stronger dykes and locks and reducing the sealed surfaces was not enough for the Danes.
Denmark is the first country in the world to set itself the target of completely eliminating the use of fossil fuels. By 2050, they want to completely waive the use of coal, oil and gas. The small Scandinavian country is increasingly becoming a pioneer in the field of sustainable construction projects. Denmark's new architectural flagship projects attract design enthusiasts and urban developers from all round the world.
Joachim Stoss, Managing Director of the German company Edgetech Europe GmbH:

Scandinavian and especially Danish architecture has been setting standards for years.

Sustainability is much more than just energy efficiency and resource conservation, as evidenced by the Maersk Tower in Copenhagen.

Creative use of the design element of copper

Having already won many awards, including the Scandinavian Green Roof Prize 2017, the Copenhagen City Architecture Award 2018, the World Architecture Festival Award 2017 in the category of "Higher Education and Research" and the European Copper in Architecture Award 2017, the Maersk Tower is already a new landmark of Copenhagen a year after it was opened. As part of the Panum Institute of the University of Copenhagen, that is home to the Department of Health and Medicine, the three-bladed, slightly corrugated tower is Denmark's most energy-efficient laboratory building. Rainwater collected for toilet flushing and garden irrigation, automated LED lighting, a connection with the remote cooling system, many green areas and roofs and in particular the unique solar protection solution all contribute towards this. 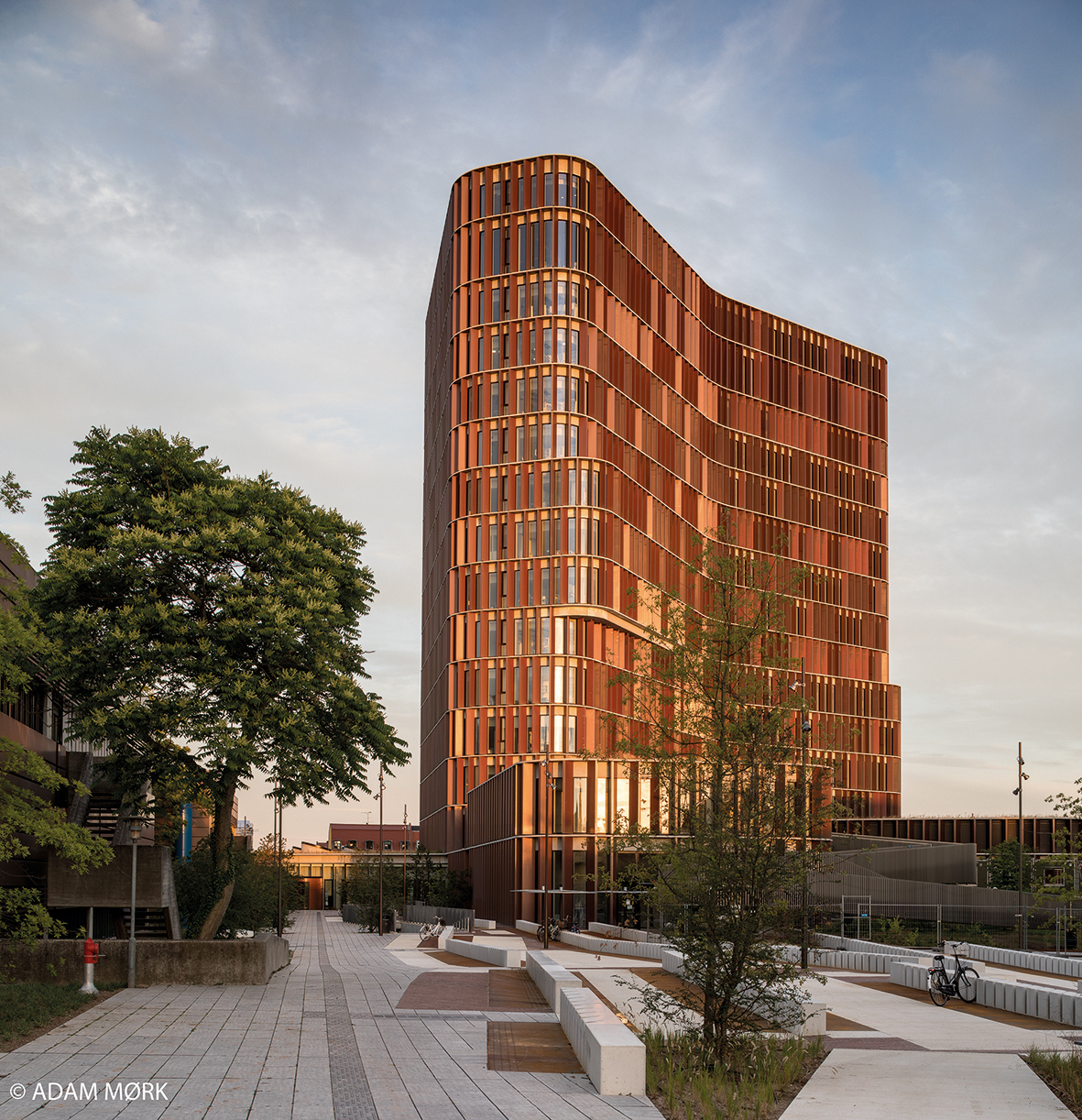 A design resembling a relief of horizontal fibreglass elements and 3,000 vertical copper-clad fins was installed in front of the transparent aluminium facade with storey-high triple-glazed units and panels. They act equally as solar protection and as a windbreaker. The shutters that have in some cases been designed as movable elements act in accordance with the weather. Where there is a large amount of sunlight, copper grids automatically protrude from the slats. They reduce the energy input, but still allow daylight to enter the rooms. The material of copper was not chosen by chance, but by way of an homage to the surrounding architecture with the traditional brick facades.

It is not even 20 years ago since architect Helmut Jahn and structural engineer Professor Werner Sobek set a milestone on the way to an energy-efficient, transparent glass building shell in the form of the Highlight Towers in Munich. At a time when most insulating glass manufacturers had focused their production on double glazing, they created one of the first transparent high-rise ensembles without a reinforced concrete core, but one that did come with a single facade, triple glazing, natural air conditioning and building-connecting “sky bridges”.
Today, triple glazing is, in most cases, standard when it comes to creating energy-efficient building envelopes. Warm edge spacer, which significantly reduces thermal bridges at the edge of the glass and thus heat loss, is a comparatively young product.

Now a mere 30 years of age, our Super Spacer spacer system is one of the pioneers.
(...)and despite the spacer being so small in terms of the overall volume of the construction, it is more important than ever for insulating glazing, if you have ambitious energy efficiency goals to reach.

Explains Joachim Stoss.
The Maersk Tower incorporates Edgetech Super Spacer® TriSealTM Premium Plus in the 1,200 m2 of cylindrically curved glass elements produced by the Glasbiegerei Döring on behalf of Waagner-Biro. For the convex and concave triple glazing units, an SSG CLIMATOP CONTOUR glass structure with extremely translucent, neutral diamond white glass was selected to ensure as much daylight as possible enters the room in the long Scandinavian winters.
Industrial quality Super Spacer® processing
Acrylic adhesive is externally applied to the three-stage edge compound system, permitting the immediate further processing into insulating glass units. Especially in the event of triple-glazing inaccuracies in the spacer application covering a large area it can rapidly take on an unattractive appearance. The Super Spacer® spacer system facilitates precise, absolutely parallel application in addition to corners with exact 90° angles.
U-values of up to 0.5 W/m2K are achieved by means of the curved triple insulating glass of the Berlin-based company, but the edge seal has to withstand absolutely all imaginable stresses to ensure decades of use. The following applies as a rule of thumb according to Döring: the narrower the bending radius and the smaller the format is, the higher the bending stiffness will be.
As a result, the edge seal is less pumpable and is thus subjected to higher stresses. Flexible spacers also undergo the weather-related pumping movements of the glazing, however by their nature they flex with the glass and always return to their original position, minimising the stresses in the edge compound, and especially on the seals. A small but important detail in some projects is also the appearance according to Hering.

For us as a glass bending company, in addition to the excellent heat-insulating properties of Super Spacer, the industrial quality of processing it was the deciding factor.

Glass bending often requires genuine and time-consuming manual work. The millimetre-accurate and rapid application of the spacers from the roll is therefore both an economic and a quality issue.

Due to the fact, curved glass panes are usually installed next to flat glass panes, naturally no differences in the processing should be visible. The black Super Spacer® chosen for the Maersk Tower has neither any perforations nor light reflecting surfaces.
Joachim Stoss concluded by stating:

Super Spacer stealthily saves energy due to the fact it completely disappears from view when installed in the frame profile.

Edgetech’s Super Spacer® flexible foam-based spacer systems acts as energy-efficient warm edge spacers in insulating glass windows. They significantly reduce energy loss to the outside, largely prevent condensation and also contribute to the lifetime of a window. On average, worldwide, more than 300 million metres are sold annually in over 90 countries.
Edgetech Europe GmbH, located in Heinsberg Germany, is a fully-owned subsidiary of Quanex Building Products Corporation, an industry-leading manufacturer of components sold to Original Equipment Manufacturers (OEMs) in the building products industry. Quanex designs and produces energy-efficient fenestration products in addition to kitchen and bath cabinet components, with its head offices in Houston, Texas.
Based on turnover Edgetech/Quanex is the world‘s largest manufacturer of spacers. Edgetech Europe GmbH is a sales location for the markets in continental Europe and one of the three worldwide Edgetech production plants, with a total of 450 employees and 16 extruders.
#glass_facades, #Maersk_Tower, #steel_glass_technologists, #Super_Spacer, #Edgetech
SPRAWDŹ OFERTĘ FIRMY 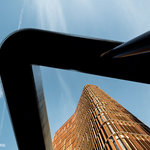